Larnach Castle, situated on a scenic hill on Otago Peninsula and overlooking Otago Harbour, boasts of being the only castle in New Zealand. William Larnach, a businessman and politician, had the mansion built between 1871 and 1874, though after he moved in improvements continued to be made through 1887. 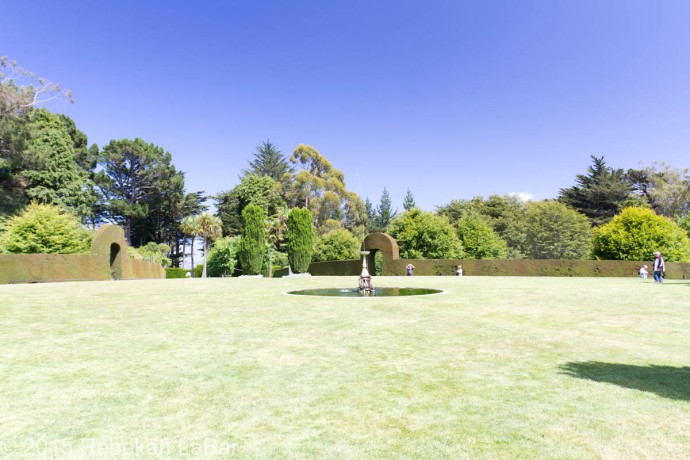 There is an Alice in Wonderland theme throughout the gardens, and statues of everything from Alice to the Cheshire Cat to the Queen of Hearts. 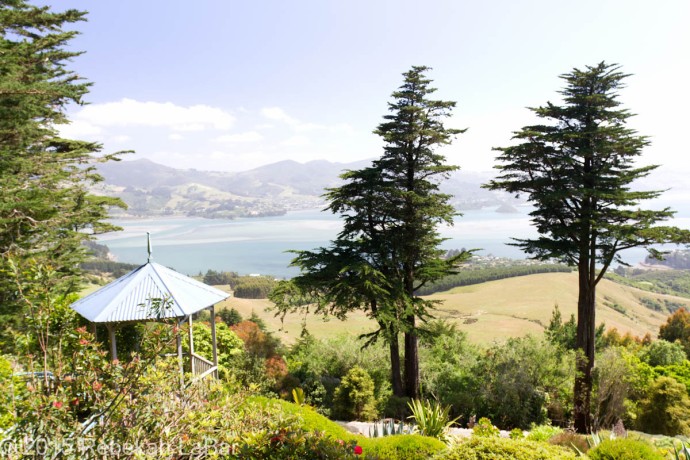 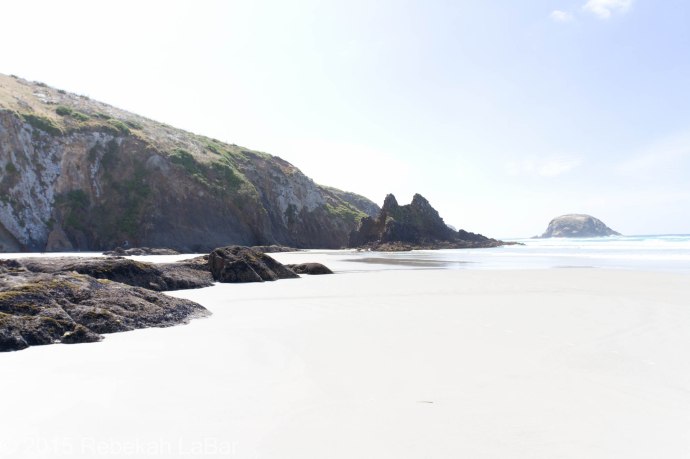 The next morning after viewing the Little Blue Penguins, my friends and I went to a beach on the south side of Otago Peninsula. We were hoping to see some sea lions, as it is one of the few places around the southern coast of the South Island that the New Zealand sea lions can be found.

I had already seen many New Zealand fur seals on both the North and South Islands, but I had never before seen a sea lion in NZ.

The beach was nearly empty, which was quite nice, as it is not a well-publicised spot. We walked down the beach a little ways, towards some rocks that I thought would make good hiding places for seals and sea lions, when I suddenly spotted something laying in a pile of kelp. 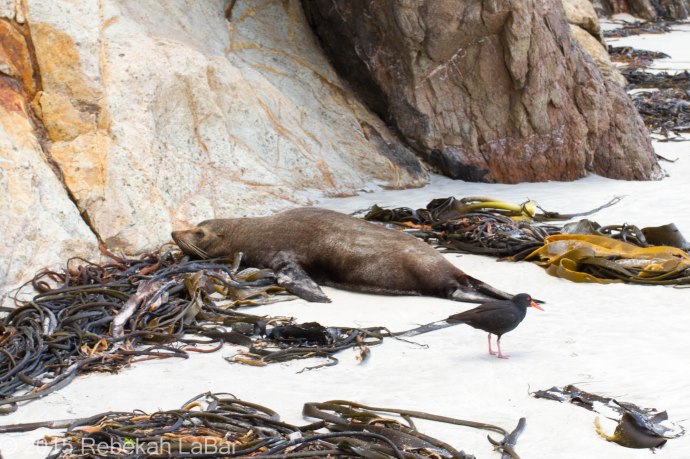 I signalled for my friends to come over and have a look, and at first I thought it looked just like the fur seals I had seen, but wasn’t quite sure from a distance if it might be a sea lion.

I’m a little ashamed to admit I hadn’t seen enough photos of the differences between them, but since then I have had a better look at my photos and compared them with the Department of Conservation images and confirmed this first one was a fur seal. The fur seals have the longer, pointy snouts and long, pale whiskers, while the sea lions have shorter, blunter noses with short, darker whiskers.

After leaving the poor seal alone to sleep again, we started to wander back up the beach when a couple of my friends started shouting and pointing towards the water. 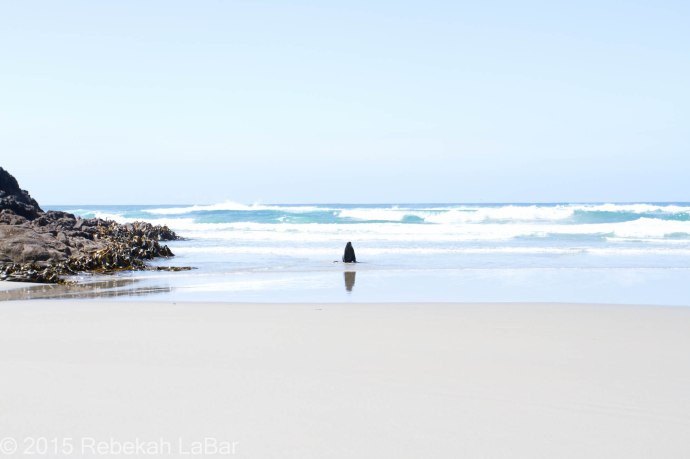 This time it WAS a sea lion, a pretty big one, and it was my first in New Zealand! We watched it rise up out of the water and start awkwardly splashing out and trotting on to the shore. My friend who was closest said at first he thought it looked like a person coming up out of the water at that distance….

The sea lion laid down a few times as if it were tired and wanted a nap, but then would get back up and lumber over to the next stopping place. Each time we tried to follow it from a safe distance, at least until it finally turned and headed towards the sea where I was standing. They say never to get between a seal or sea lion and the sea, which is what I realised I had done unwittingly, so I quickly backed way up and the sea lion waddled right on past to go back to the sea (perhaps to look for a quieter spot…sorry buddy!).

It was pretty awesome to see the sea lion rise out of the water and manoeuvre around a bit on land. And now I know what sea lion tracks look like in the sand. 🙂

Did you know that New Zealand has penguins? There are actually three types of penguins here, mostly about the South Island: Little Blue Penguins, Yellow-Eyed Penguins, and Fiordland Crested Penguins.

Little Blue Penguins (more commonly known as Little Penguins) are the smallest species of penguin, smaller even than a small chicken. They are common around New Zealand and southern Australia, but New Zealand’s Department of Conservation wants to make sure they continue to thrive even as they are threatened by cars, pets, reduced habitat for nesting, etc.

Last winter (mid-2014) I volunteered to help monitor Little Blue Penguin nesting sites around the south coast of Wellington. The volunteers went to a training session where we learned more about the penguins and what data to record. We formed groups of three and were assigned a bay to monitor every fortnight with alternating partners. For each nest box we had to measure the internal and external temperature, check to see if there were any occupants, and record any other relevant information.

Three of the five boxes at my bay eventually had chicks hatch, two in two boxes and one lone chick in another. The penguin adults take turns sitting on the eggs and keeping the chicks warm early on, until they eventually both bring back food and finally leave the fledged chicks to force them to venture out to sea on their own.

See Wikipedia for a photo and more about the penguins. I don’t have any good photos of the penguins yet as I wasn’t allowed to photograph the ones in the boxes, as I shouldn’t disturb them any longer than is absolutely necessary.

Now that all of our chicks have fledged, we switch to monitoring the boxes just once a month as they will still occasionally be occupied by moulting penguins.

Wednesday afternoon I flew down to Dunedin to meet up with some friends traveling the South Island. I spent two days traveling around with them and seeing more great country, but more on that another time. Wednesday night we went to the Royal Albatross Centre on Otago Peninsula to watch the Little Blue Penguins come ashore.

The penguins spend all day fishing at sea, and then come back in the hour after sunset, looking quite exhausted. While I had seen Little Blues up close and personal before, it was pretty cool to see an estimated 150 or so emerge from the water and run up the hill.

They mostly came in groups of 10 to 20, and at first we would just see a dark wave headed towards the shore. Then the water started to look like it was bubbling and churning as if a strange creature were about to surface, only to just make out the shapes of tiny paddling penguins awkwardly splash out on land.

Most of the penguins then started to run up the bank towards their nests and shelters under the large wooden platform we stood on, while some just looked around as if they were thoroughly confused as to where they were and what they were supposed to be doing.

It was a cold and windy night and I only had a light jacket and didn’t know if I would last the hour while we waited for the penguins to start their run, but as soon as they began to appear I forgot the cold.

The Royal Albatross Centre had lights set up around the platform so we could pretty easily see the penguins after dark, but we were not allowed any flash photography. I only took a few blurry shots with my camera phone but you can get a bit of an impression of what the penguins looked like from this video clip I took as well (it’s a little better if you watch in HD). Note the bird sounds are not those of the penguins but of the many seagulls still settling down for the night.

It was a great experience and I would recommend it to anyone who wants a guaranteed sighting of the Little Blues!