Tony and Leck reeling in an Aku

My Dad always says there’s a reason fishing is called fishing instead of catching. While not a stranger to freshwater lake fishing, my first time deep sea fishing was, well, a fishing trip and not a catching trip.

In years past, Kwaj fishermen tell me the fish used to be plentiful here, and they would almost never come back disappointed. More recently, an increase in the number of commercial fishing vessels licensed to operate in the Marshall Islands (e.g., Japanese, Chinese, American) has led to a decrease in success for the locals.

To some extent the fishing in the Marshall Islands depends on the time of year. Not that we really get seasons here, but some fish migrate to (or come from) other parts of the world that do.

After living on Kwajalein for almost two years, a few of the regular fishermen invited me out on a boat to finally go fishing one morning in early April.

It was towards the end of Mahi Mahi season, so they told me, but we still thought we might catch one or two and probably some tuna and/or Ono (aka Wahoo). Two of these guys had been boasting for a while that they went out fishing almost every weekend for the last two years (when they got here), and ALWAYS caught at least one fish. One of them had even recently acquired a giant cooler that was perhaps twice the size of the coolers available to rent at the small boat marina, and got me a small pair of gloves to borrow so that I could pull in one of the hand lines.

The regular setup these guys have is two large poles and two hand lines, one on each side of the stern of the B-boat (the 22-foot twin-engine powerboats available for rent on Kwaj).

We set out trawling up the west reef of the atoll, anywhere from about a half-mile away from the islands to a mile or two out in the ocean (the rental boat limit is 3 miles oceanside). As you can probably guess from the build up, we tried our best and occasionally changed lures, but ultimately came away skunked. I didn’t feel too bad as it was still a nice morning out, but the guys felt terrible (“first time!”) and dreaded the “walk of shame” up the dock with an empty cooler and no fish to clean.

Once back at the marina, we were slightly consoled by the fact that the most any of the other boats caught was three. Sadly we couldn’t even say we got a hit on a line but the fish got away.

The next weekend, I had to go with them again and hopefully actually catch something.

As soon as we went outside SAR Pass (the nearest ocean pass, on Kwaj’s west side), we came across a huge pod of spinner dolphins!!

I was thrilled to the core, and kneeled down at the bow of the boat to try to get close up shots (sadly with just my cheap point-and-shoot as I didn’t risk my DSLR). I had seen dolphins once or twice before from the shore, but they were always a ways off. The spinner dolphins we have here like to jump out of the water and spin around their long axis, which can make quite the show if there are a few showing off.

I had heard people say that the dolphins seem to love powerboats, and swim right alongside the boat, but I had never witnessed this until that day. Surrounded by an estimated 150 or so dolphins, I knew the day was going to be a good one. The water was literally THICK with them, and they liked to get right up under us and so close that I was a bit afraid for them, but they were fearless. That right there made the trip for me.

Not long after the dolphins disappeared, rather as suddenly as they appeared, we got a hit on one of the hand lines, and to our delight brought in a Mahi Mahi. 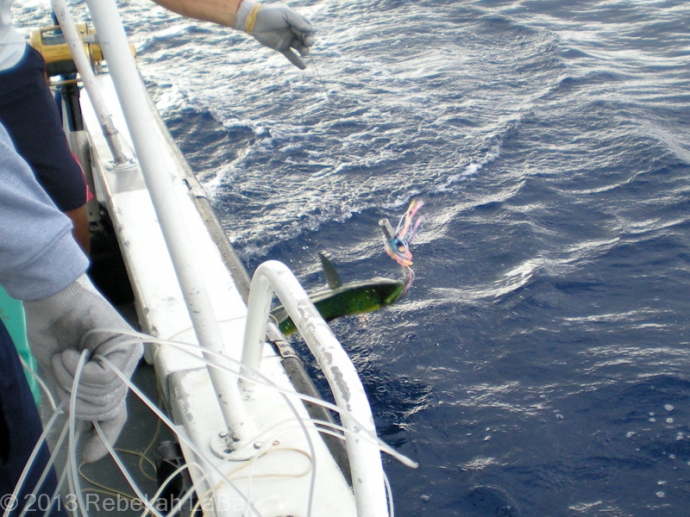 Excited to have the monkey off our back, we were in high spirits but still had to wait a while before our next bite.

This time we brought in an Aku (Hawaiian name for a Skipjack Tuna) on one of the poles. Akus are quite feisty, and as soon as one of the guys tossed it in the cooler, it started rapidly vibrating and making quite the racket, especially with all that space.

After trawling around for a while and changing lures again, we suddenly got a hit from a marlin!! One of the guys started to reel in the pole, but it was just playing with us and got away. After another minute, it hit a handline. Our boat driver even saw it crest the water, so we knew for sure it was a marlin.

Sadly the marlin never did take a good bite, so we lost it, but it sure gave us some excitement for a few minutes. We even saw its bill frayed the end of the hand line, which was interesting.

We finally had to head back to the marina as our boat’s rental time was up. While the guys might have been a little disappointed we didn’t have much more luck than just the two fish, after the previous week we were glad to have at least caught something for dinner.

I had another wonderful day, from the dolphins, to the fish we caught, to the excitement of the marlin, to another fine day with friends, and a most delicious grilled fish dinner outside on a lovely tropical evening!

Nurse Sharks at the marina, devouring discarded bits of the fish

For a few more photos of the fishing adventure, see my Kwajalein Atoll Fishing Flickr set.