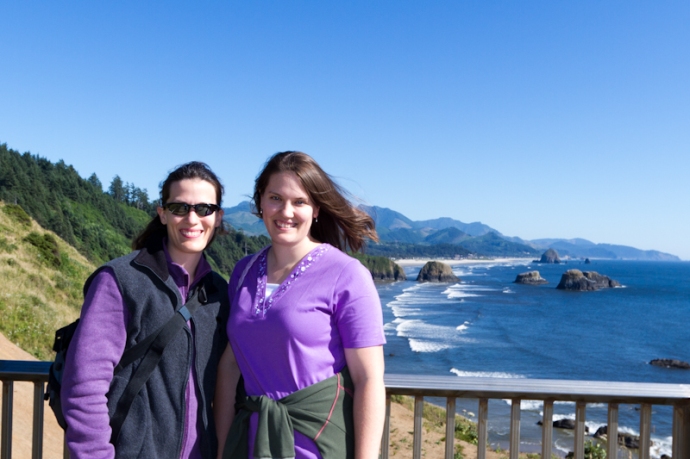 Me and my sister, at Ecola State Park, with Cannon Beach below us

What do people who have been living on a tiny island in the middle of the ocean do when they go on vacation? Go to the beach, of course!

This morning my sister and I (or rather I) laid low as I was nursing a bit of a cold, but then in the afternoon we decided to take the short trip to the coast to see some favorite spots on the north Oregon coast, as well as to finish up the shopping I had started yesterday for cold weather New Zealand clothes.

It was a beautiful blue sky day, and about as pleasant as it gets there on the coast. I was only a bit chilly at times, thanks to my thinned tropical blood, as you can guess from the differences in what my sister and I were wearing. I was also not quite brave enough this time to wade in the water, as many accustomed to the colder waters were doing, especially when I was not quite feeling 100%.

One of the places we stopped at was new to me, Fort Stevens State Park. Caitlin had been there before with some friends, but had not seen the shipwreck as exposed as it was today. 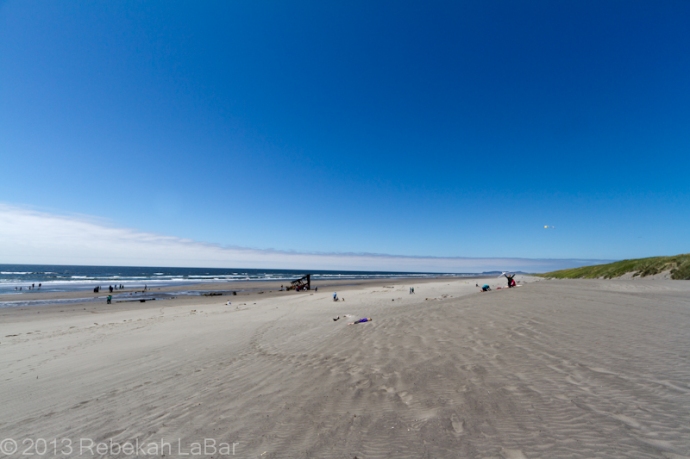 The Peter Iredale was a barque that ran aground while sailing from Mexico to Portland, Oregon late in 1906. Everyone on board survived, but the ship was badly damaged and eventually the remains were left alone.

Bow of the Peter Iredale wreck. It was also a fine day for flying kites!

We later drove further south to Ecola State Park, a great lookout point over one of our family’s favorite vacation spots, Cannon Beach.

Cannon Beach with Haystack Rock and the Needles in the distance, from Ecola State Park

We also had fine viewing conditions from the park out to one of my favorite lighthouses, Tillamook Rock Lighthouse, fondly known as “Terrible Tilly”. I got a book about this light over 10 years ago and was fascinated by its story. 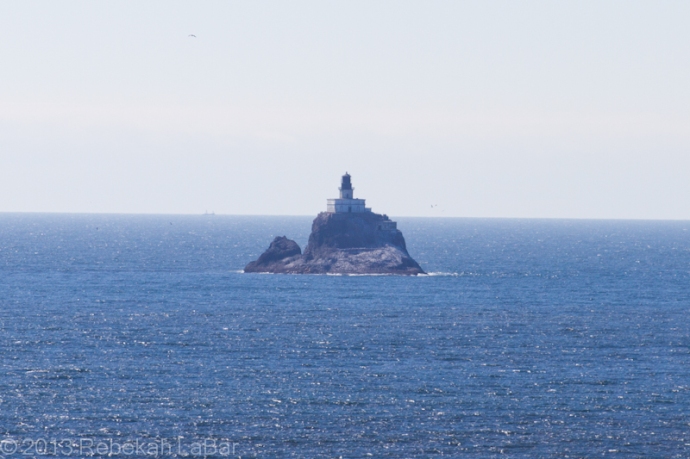 Tilly was built in the late 1800s, on a tiny rock (yes, much smaller than Kwaj…only about an acre, if that!) just over a mile out to sea, and about 20 miles south of the mouth of the Columbia River that separates the states of Oregon and Washington.

After many years of being the most expensive lighthouse to maintain, through many ferocious Pacific storms, Tilly was retired in the 1950s and the private owners converted it to a columbarium (storage for urns with cremated remains). The only way to reach the lighthouse is by helicopter, and sadly it is not open to the public. 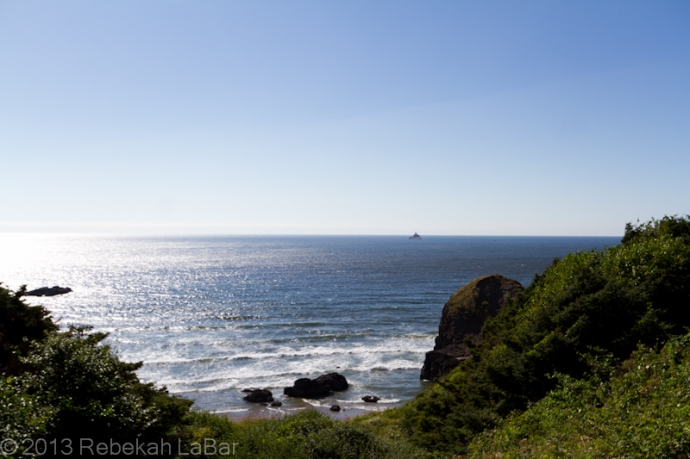 It was wonderful to spend even a brief time looking out over the terrific Pacific, especially as I had just come from an island some 5,000 miles southwest of where I stood, and would soon be traveling to another Pacific destination some 7,500 miles or so away.

For the first time, though, I was at least initially more taken by views of the forests and mountains, as it’s been so long since seeing good ones of both. My sister teased me that the trees around Ecola State Park that I took a couple photos of before finishing my ocean shots were probably not used to being photographed by most tourists.

Average trees on average hills in Ecola State Park, with Tilly at my back…but still just happy to see forests and elevation!

We’ll probably go check out more forests and/or mountains in the next day or two, but I am glad we were able to see one of my favorite and most frequented spots on the coast. 🙂

For the whole album, including a few more photos from the coast, check out this Flickr set.